We opened Amelia’s Wood Fired Cuisine in April 2017 bringing our vision of Oklahoma Cuisine to Downtown Tulsa and now three years later we are opening our second location, Amelia’s Market and Brasserie. As Tulsa contnues to grow and develope and as more people take up residence in Downtown and The Arts District in particular the need for retail food and fresh shopping options in the area has become obvious. No longer is there a need to get on the highway any time a gallon of milk or head of celery is required and as alumni of the Tulsa dining scene we have also learned the value that a commissary retail kitchen can bring to a restaurant.Throughout the existence of Amelia’s Wood Fired Cuisine we have spearheaded partnerships with many local farmers and as a result our market offers local meats, dairy, and produce as well as house made breads, jams, sauces, and ready-made entree options to make weeknight dinners a little more manageable. You will also find fresh seafood, thoughtfully sourced deli options, and our own curated list of wine by the bottle. We strongly believe that quality ingredients are necessary for a good meal and want to share our high standards for food and hospitality with the residents of Downtown and our guests at Amelia’s Wood Fired Cuisine, the Brasserie, and the Market.
The Brasserie is a sister restaurant to Amelia’s and was created because of our love of French Cuisine, the format of an all day menu that is quintessential to a French Brasserie, and because of the lack of high quality French dining options in Downtown Tulsa. The Brasserie offers a more casual environment and encourages guests to sit and study or share a carafe of French wine and mussels with a friend, and features rotating daily specials. The beautiful dining room is also a great option for special celebrations or business meetings.We are extremely excited to bring this concept to Tulsa’s Arts District and the greater Downtown area. Excellent ingredients lead to excellent food, hospitality and attention to detail lead to a beautiful experience; we hope to provide you with both and we hope to see you soon!

Recognized as one of America’s Best Chefs in 2013 by the association Best Chefs America, Chef Andrew Donovan moved to Tulsa in March of 2019 to run The Reserve at Grogg’s Green Barn, a garden-to-table concept featuring a 7-Course Tasting Menu that changes monthly from April through November. Known for his simple, straightforward culinary style and passion for local, seasonal ingredients, he brings over 25 years of industry experience to the Tulsa dining scene.

Growing up, Andrew ate family meals prepared by his father, an accomplished home cook who made everything from scratch; he remembers picking and canning fresh strawberries from his grandmother’s garden, which instilled in him an appreciation for simple, ingredient-driven cuisine. At 15, he got his first job washing dishes, earning the position of prep and line cook within six months.

Chef Donovan received his degree in Culinary Arts from the Art Institute of Fort Lauderdale in 2000. He was promoted to sous chef at Oliver Saucy’s Café Maxx, an Innovative Restaurant Concepts (IRC) property in Pompano Beach while attending culinary school; after graduation he was hired by IRC as Chef de Cuisine at the East City Grill in Birmingham, AL. He then spent four years in Savannah, GA, as Executive Chef of the Sapphire Grill under Chef-Proprietor Chris Nason, and in 2005 he joined Nason at New York City’s famed James Beard House to create dishes for their “Savannah Nights” themed dinner.

In 2006, he accepted a job at Manhattan’s Core Club, an exclusive private club supervised by famed chef Tom Colicchio, and received another invitation to cook at the Beard House as a representative of the club during the “Winter Truffle Indulgence” dinner. He was later hired at Tía Pol in West Chelsea and was quickly promoted to Executive Chef at both Tía Pol and sister restaurant El Quinto Pino. Under Donovan ́s direction, Tía Pol beat out Mario Batali ́s Casa Mono as New York ́s best Spanish restaurant in the 2008 Zagat Guide.

From 2010-2014, Donovan was Chef-Proprietor of farm-to-table concept The Brine and Bottle in Nags Head, NC, which was featured on Food Network’s “Diners, Drive-Ins and Dives,” as well as Taste of the South and Outer Banks magazines. He went on to work a stint with Stephen Starr’s Le Zoo in Miami, FL, before joining Atlas Restaurant Group as the Regional Corporate Executive Chef overseeing menu development and operations for the Boca Raton locations of Ouzo Bay and Loch Bar.

Andrew currently lives in Tulsa with his wife Ashley, a sommelier, and their two sons, ages 6 and 2. 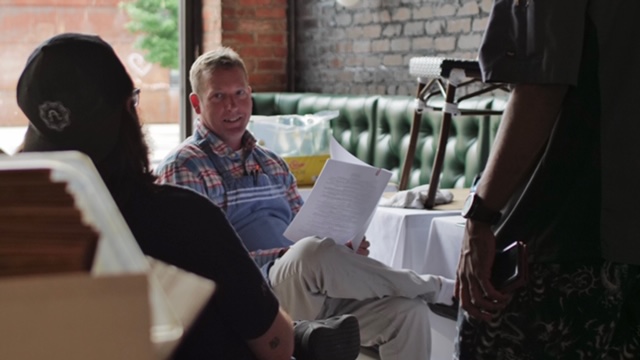